A Race Car Birthday Party on a K-Car Budget…

“Anyone can do anything with a million dollars. Look at Disney. But it takes more than money to make something out of nothing, and look at the fun I have doing it.”  ~Tressa Prisby

The first thing I ask my kids is, “what kind of party do you want?” Then I start by looking around the house to see what we already have that we could use. Usually, I will find plenty. The thing is, the type of party a child asks for is most likely something he is already interested in, which means you probably already have a bunch of stuff in your home you can use.

My smallest boy turned 6 last week, and he wanted a “race car” birthday party. Yes, I could have gone to the party store and found a hundred different plates and hats and party favours that had a car theme. But how much of that stuff is disposable? All of it. We spend all kinds of money on things that will end up in the trash can at the end of the day.

Here is a list of things I typically buy for a party, with the estimated cost of each item…

Colored serviettes: $2. Normally we use cloth ones in my house, but I make the exception at birthday parties, because I just don’t want extra laundry!

Paper cake plates: $2 I do not buy paper plates for the meal if I am serving one. I use our own dishes and throw them in the dishwasher after the party. I do buy cake plates, though. I find most kids don’t eat all their cake, so it’s nice to be able to just throw the whole kit and kaboodle in the garbage instead of scraping and rinsing plates.

Balloons: A bag of 12: $2 If I am putting helium in them, I have them done at the dollar store for 75cents each. There is no need to go to an expensive florist for balloons. At this particular party, I didn’t use helium. I put matchbox cars inside the balloons before blowing them up, so the kids could pop them later and take them home as party favours. I bought 1 package of 10 no-name matchbox cars in the birthday section of the grocery store for $4. 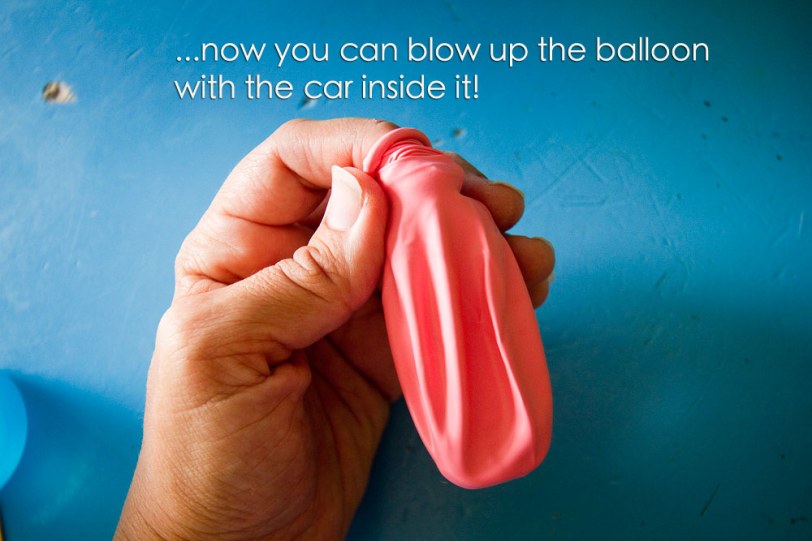 The children tried many different ways to pop their balloons, from sitting on them…

To squashing them with big trucks…

When the baolloons popped, it was always the same reaction… 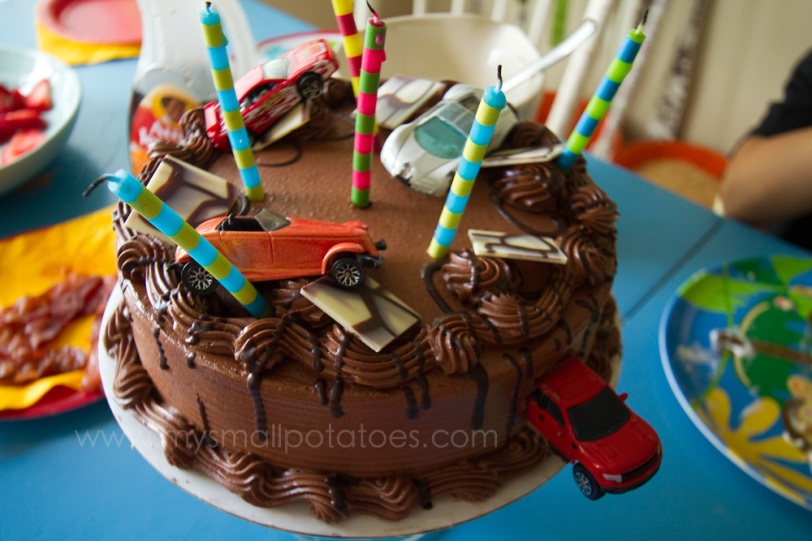 I let my son choose the cars for his cake form his own collection. His favourite car was the first to make it’s way to the kitchen…

I used the white chocolate wafers as car ramps to hold the front of the cars up, giving it more dimension and character…

And I even backed the truck up into the side of the cake. My son thought that was “epic!”

Party hats:  $3 I like to buy plain hats and do them up with my own personal flair. I don’t always buy party hats, but this time I had an idea. I took some of the cars from the package I bought for the balloons and used glue dots from my scrapbooking supplies to stick the cars to the hats… 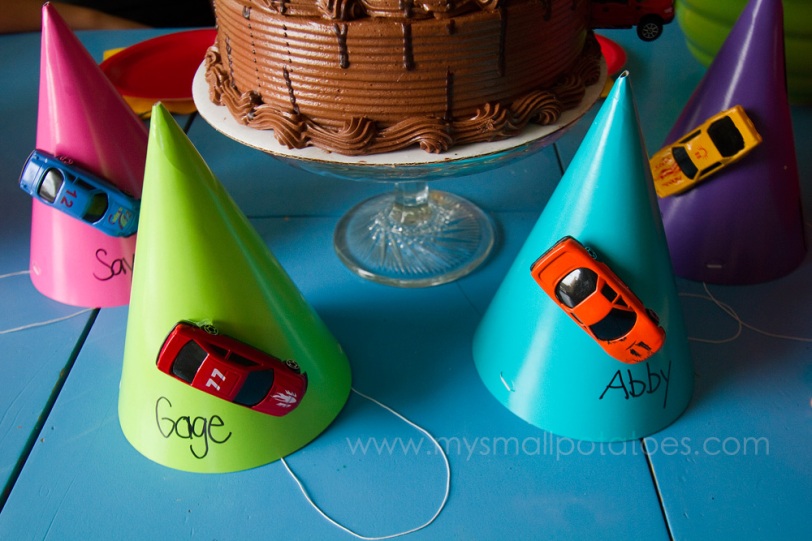 The kids could take their hats home and in the end, were left with a new car to play with. Plus, it looked really cool according to my boy!

Candy and treats: $20 We have a traditional candy bowl at our parties. The birthday boy/girl gets to shop for 4-5 packages of their favourite candy and dump it all into a big bowl for everyone to share. What I like about this is that I don’t have to fill loot bags with candy…the children get their fill at the party!

Favourite Meal: This depends on what you’re making. For this particular party, the cost of the meal was about $13. Gage’s favourite meal is pancakes and bacon. I purchased whipping cream, strawberries, and bacon. The rest, I already had in my pantry.

The money we’ve spent so far is only $64! You have a whole $36 left to spend before you reach $100! You could bank it, or you could buy actual name brand cars! Hehehehe!

To finish off a party, I usually do a craft or activity for the kids. This time, the activity was messy. But very inexpensive…

I started out by pouring left-over brown paint from the dayhome into the sensory table. You could use a big  plastic bin or two, depending on how many children you are planning for. The kids “needed” more mud, so I whipped up a recipe of cornstarch paint. Because my table is so large,I multiplied the recipe so I was using almost 2 cups of cornstarch. You could probable triple or quadruple it and have enough for a mid-size plastic bin…

Gage chose the cars he wanted to use for the mud derby, and away they went…

This looks like a fantastic mess…but its very simple to clean up. Cornstarch dissolves in water, so it all washes down the sink. I scooped up what I could into a bucket. Then I brought the bin into the sink and used the spray nozzle to wash the rest down the drain. Easy. And what fun! He said it was his favourite part of his birthday party.

After the derby, we washed up and blew out the candles. A successful party for under $100. We did it! 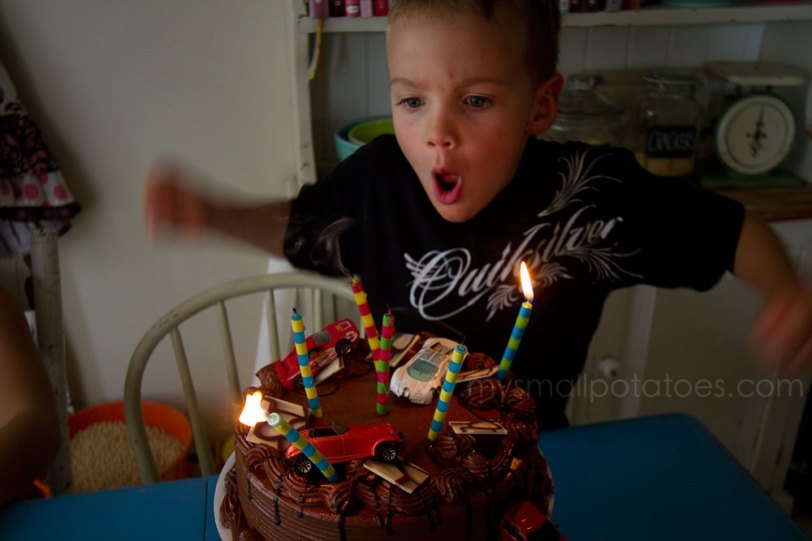 And then he said those magic words…