Monster Jelly Slime Bowl for Babies…Or, Turning a Fail into a Bigger Success!

“Touch comes before sight, before speech. It is the first language and the last, and it always tells the truth.”  ~Margaret Atwood

It’s time to get back to the babies here at Small Potatoes. I promised I’d be bringing more baby posts, so here you go. But I have to say, this activity was almost a giant fail. For real.

Babies learn through touching everything. They also learn by tasting everything. So I have been wracking my brain to come up with baby-safe sensory play ideas for the 2 boys in my care. I have seen plenty of posts out there for playing with jello, and I figured they were on to something. Jello is pretty and inviting. It’s tasty. It smells good. And completely baby-safe.

I figured I’d make a bowl of it for the babies to play in. How hard could it be?

Well, my jello didn’t set. I waited. I waited some more. It still didn’t set. I put it in the freezer to cool it faster. I got nothin’. Sigh. I had babies waking up from naps soon and I had nothin’.

I didn’t want to throw it out, so I nosed around in my pantry for a solution and I came upon my jar of minute tapioca. Hmmm…YES!

I poured the unset jelly into a saucepan, dumped what I thought was a “good” amount of tapioca into it and brought it to a boil. It started to thicken. YAY!

I poured it back into the play bowl and let it cool. The result was better than I had imagined. And WAY better than plain old jelly. You could actually pick this stuff up in your hands… 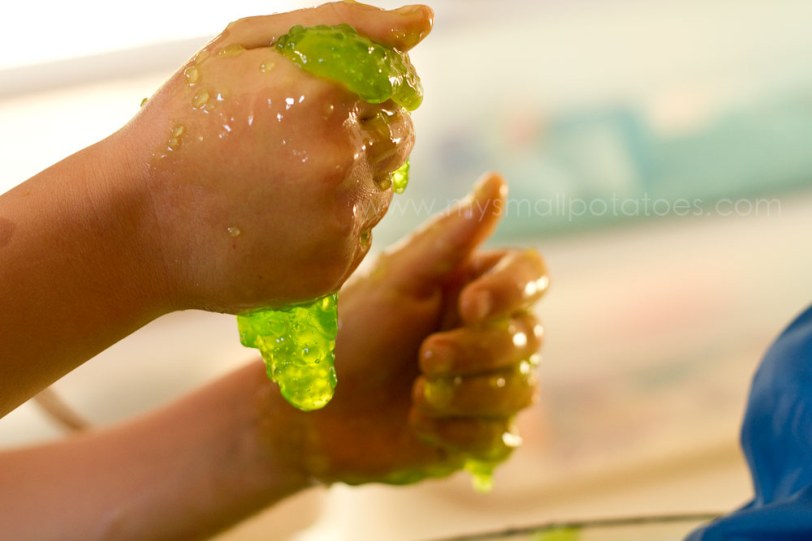 It was pretty darn cool. Slime that is still edible. It was like winning the lottery!

I gathered up some baby monster toys, as I figured slime lends itself so nicely to monster play! 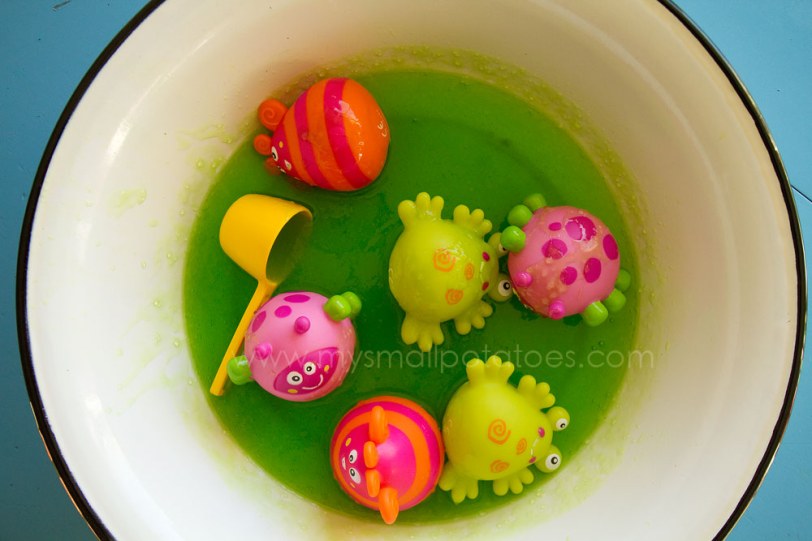 I put smocks on the babies and  set them in front of the bowl. It was interesting to watch the two different approaches the two babies had to this activity.

Baby S was tentative at first…

He was a one-handed slime player, keeping the other hand safely grounded on the floor. Hehehehe. But the other hand, he allowed to explore…

After awhile, he figured it was safe to put both hands in the bowl, and away he went. But never once did he try to put it in his mouth…

Baby S approached the slime bowl full speed ahead. He was grabbing handfuls and spreading it out on the mat beside him…

He had both hands in there, pouring, stirring, and smacking. And did he eat it? Yes he did. And loved every second of it…

The toddlers had a go with this activity and loved it. The school aged-kids played in it when they returned from school. 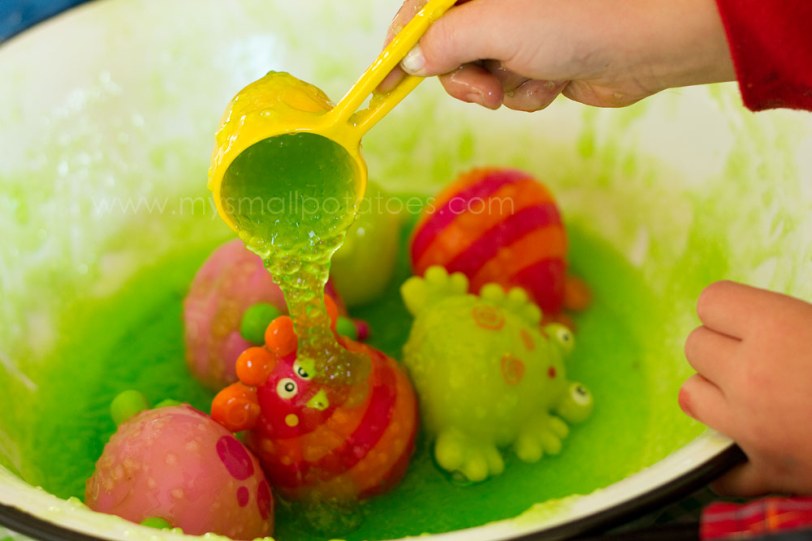 All around, my almost-fail-jelly-bowl-turned-slime-bowl was a success.

Now you want to know how I cleaned it up. Because yes…it’s super sticky. I had a bowl of water for each child who played in the slime. They sat in front of their bowls and cleaned themselves. I am a strong believer that clean-up should be part of the play process whenever possible…

Once everyone had washed and dried, I threw the smocks into the washing machine, and washed the splash mat with a warm cloth. The bowl of slime dissolved in hot water in the sink and poured down the drain. I will say though, that the bits of tapioca that had dried on the side of the bowl were stubborn, so maybe try to wash the bowl before the bits have a chance to dry up.

Next time something goes wrong, don’t give up. You know the saying…when life gives you unset jello…make slime!

9 thoughts on “Monster Jelly Slime Bowl for Babies…Or, Turning a Fail into a Bigger Success!”