“Winter came down to our home one night. Quietly pirouetting in on silvery-toed slippers of snow, and we, we were children once again.”  ~Bill Morgan, Jr.

I don’t know if you all know this…but we have had winter here for nearly 3 weeks already. We just had the worst Halloween weather on record in my mothering career. Freezing rain and sub-zero temps, on top of about a foot of snow. Not a whole lot of fun, let me assure you.

But sometimes you just have to look on the brighter, more colourful side of things. After all, winter is a long, long, long season here. So instead of complaining (too much), we decided to have a little fun with our early winter season.

We brought the snow inside. By the bucketful.

We made our own pretend snow cone station. Here’s what you need to make this at home when YOUR snow falls…

Now, I know you all are going to ask where I got the adorable monster popsicle molds, so I’ll tell you…they are made by Joie and they are called Monster Fun Pops. I found them at our Winners Home Sense. But remember you don’t need the monster ones for the kids to enjoy this activity. Any popsicle mold will do!

I used any squeeze bottles I could find in my plastics drawer, and I borrowed the plastic sundae cups from our Ice Cream Sensory Bin.   I filled the bottles with water and drops of food colouring.

Then I poured in a couple buckets of snow! The smalls grabbed a pair of mittens and got to work making deliciously colourful snow cones…

Pretty soon the whole table was popping with colour…

I think I refilled the squeeze bottles at least 4 times!

Because I think the babies should be involved as well as the bigger kids, I made them their own snow station to explore…

The boys scooped, tossed, and of course, tasted the snow… 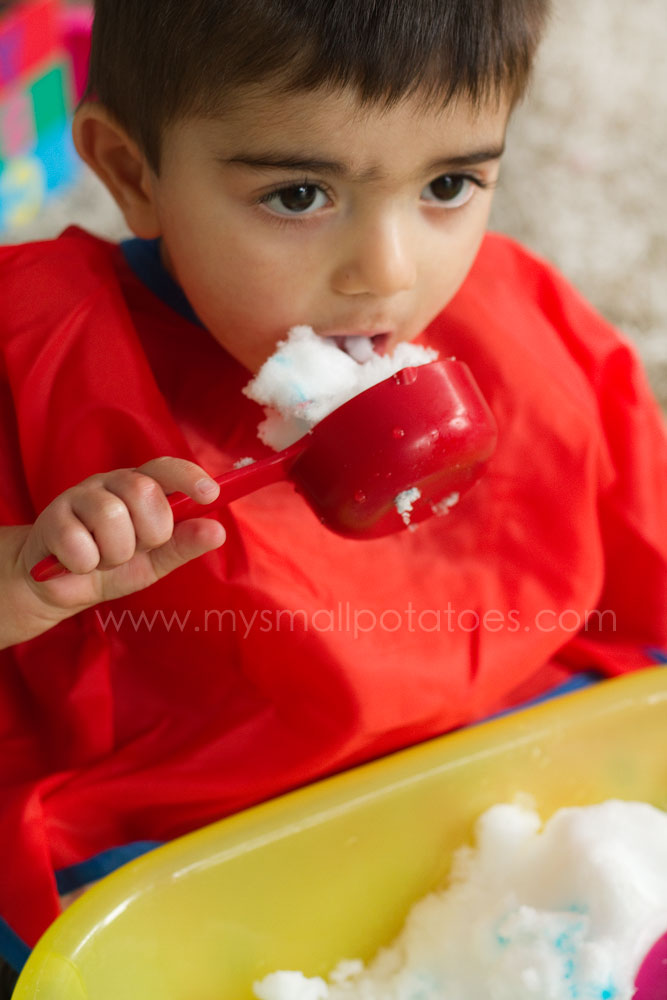 He found out it was just as cold in the kid’s table as it was in his bin!

They were able to make giant snow cones, almost as big as their own heads!

Complete with a cherry on top!

Don’t forget today is the start of Weekly Kid’s Co-op! Link up your kid-friendly activity by clicking the link below and following the simple steps. If you don’t have a blog, don’t worry! Click the view button and browse through all the other great activities that are there already!