“A matter-of-fact tone and economy of words, in combination with whimsical illustrations, create a buoyant, high-flying fantasy greater than the sum of its parts. Winsomely sure-footed.”  ~KIRKUS REVIEW, Cloudland by John Burmingham

I will admit that when I chose this book on our last library trip, I did so because of the illustrations. My imagination went crazy as I thought of the ways in which we could play with this storybook theme.

I did not read the book before I brought it home.

Admittedly, I was quite shocked in the beginning, to find the little boy Albert falling from a cliff while out hiking in the mountains with his parents. He is saved by the cloud children who utter magical incantations to keep him afloat in Cloudland.

Once the initial shock wears off, one finds a delightful story of play, magic, and adventures we all could only dream of as children…playing and romping about in the fluffy clouds up high in the sky. And the smalls LOVED it.

And I knew right away what we needed.

Bars of Ivory Soap and a microwave. 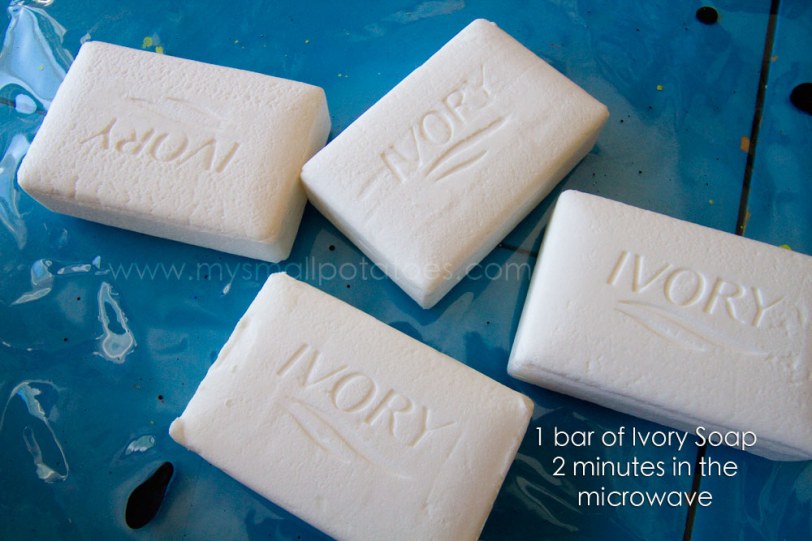 I broke each bar into 2 pieces before I microwaved them so we could have more than 4 clouds. I cooked each chunk one or two at a time (in a big mixing bowl) and brought them to the table, which I had covered with plastic…

The soap expands in the microwave, created big fluffy clouds, just like the ones Albert plays in!

Seriously. The coolest thing ever. The clouds of soap will be hot when they first come out of the microwave. Allow for time to cool before playing.

I gave the smalls a bag of cotton balls and some little plastic people, a couple of plastic fences, an airplane, and some plastic food baskets, as Albert eats breakfast in one part of the story…

The smalls set to building their small world all on their own. I wanted them to create it the way they saw it in their own imaginations…

Once they had it all set out the way they liked, the playing began. They had constructed Cloudland in a way that each set of big clouds, joined the other with smaller clouds so they could visit one another… 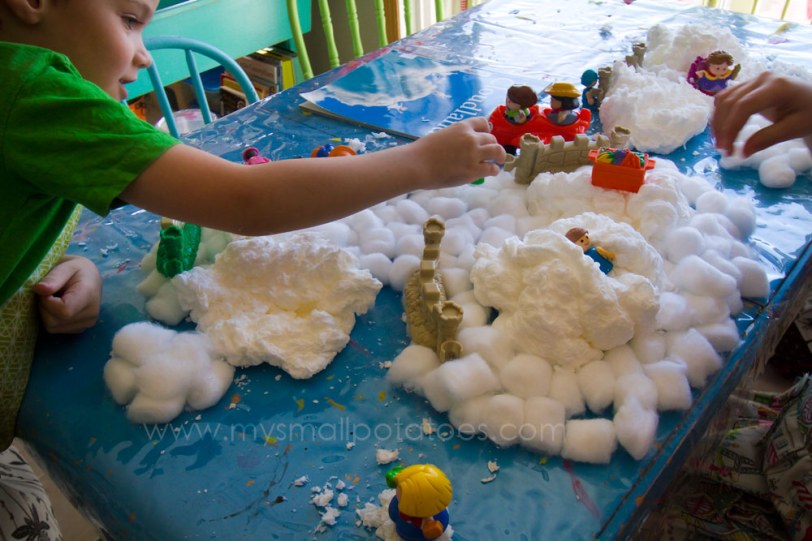 There were cloud beds… 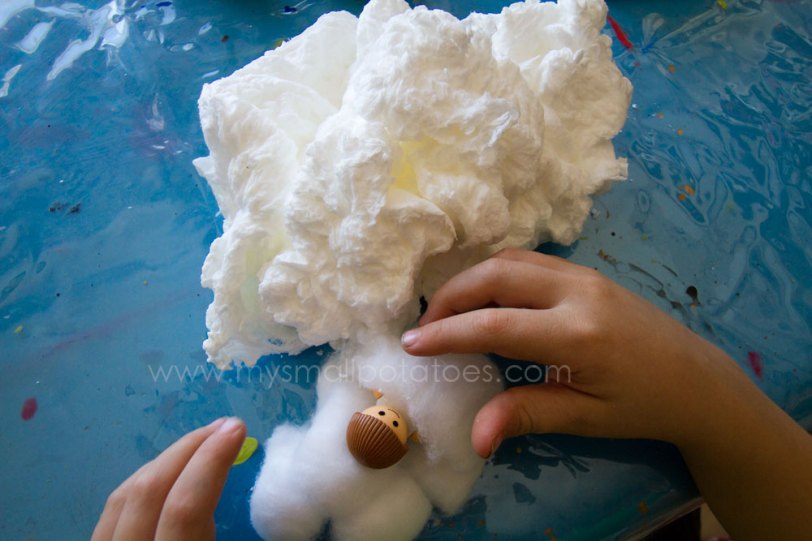 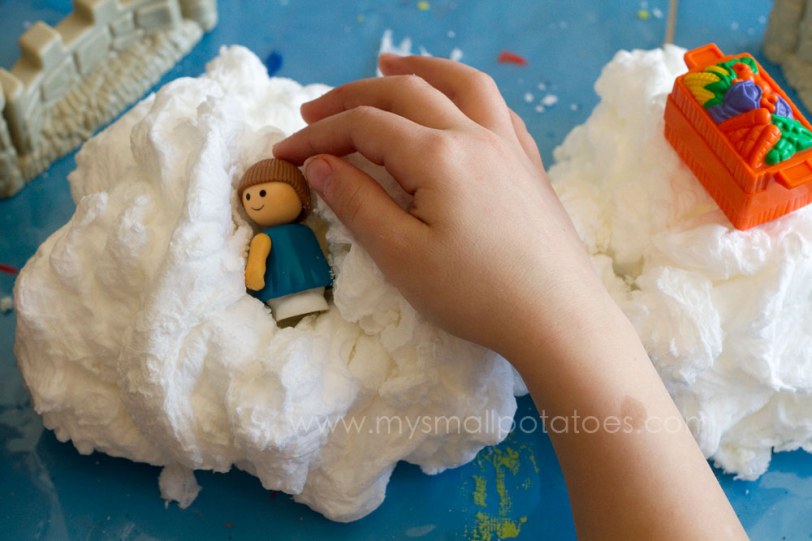 However, after Albert has played for a period of time in Cloudland, he starts to get homesick for his parents…

The cloud children say the magical incantations once again and Albert wakes up the next morning safe in his own bed with his parents. He can’t remember the magical words, and longs forever after for another chance to play in Cloudland with the children.

Luckily for my smalls, they needed no magical incantations to return to playing in their Cloudland. They romped about in there all afternoon… 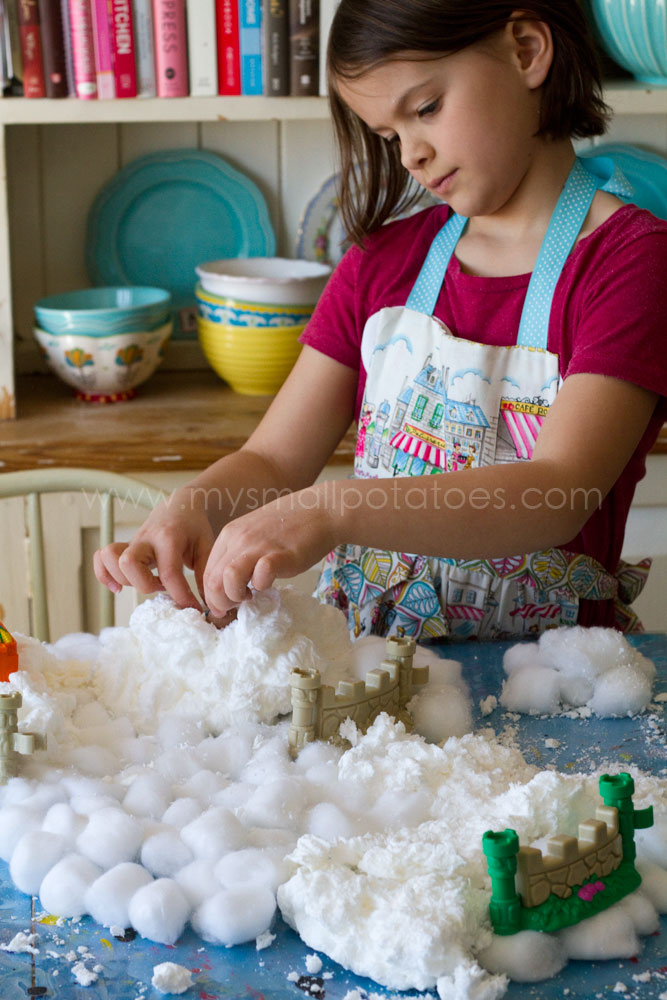 *p.s. Cleaning up Cloudland is not as bad as you may think. The flakes of soap swept off the floor and table nicely, leaving a bit of a soapy film, which I washed with a hot cloth. The soap clouds DO give off quite a scent, and if the dust gets too fine, you’ll breathe it right in…not fun. Keep a window in your play area open for ventilation, or play outside when possible.